AOM at the Newfoundland Sound Symposium 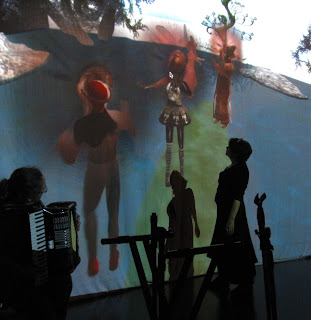 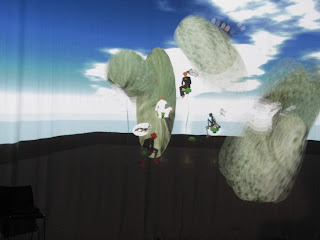 Composition and sound samples by Bjorn Eriksson.
Instrument design, animations and receivers by Andreas Mueller.
Fragula, a play with the words “fragment”, “fragile”, “fragula” and “Dracula”, was one of the first pieces of AOM, and continues to be a widely performed signature piece. One of its major ideas is to have the orchestra to wander from a fragile and fragmented digital synthesized sound texture into a more analog acoustic and not so fragmented sound texture, and then come back to where it all started. This is aurally symbolized in the granulated synthesized sounds of sine waves, square waves and sawtooth shaped sounds. Arpeggiated synthetic figures then gradually transform into the sounds of an old harmonium with imprecise playing.  A time stretched harmonium provides a transitional sound between the digital and analog sound sources.
Three sets of instruments are played simultaneously, creating chordal sound textures.

Björn Eriksson (Sweden) is a musician, composer and sound artist. He studied electronic engineering and music, and practiced professional sound engineering in Stockholm. He further explored the field of radio art, field recording and electoacoustic music. He teaches sound and internet media art and has been involved in various networked collaborative sound art and music projects and collectives such as Tapegerm Collective, Locus Sonus, sobralasolas!, .microsound, Placards, Vickys Mosquitos, nomusic sometimes under the artist names of International Garbageman and Miulew. He is also one of the forming members of MäAM and Avatar Orchestra Metaverse (AOM) where he composed two pieces called respectively Rue Blanche and Fragula.


Composition, instruments, particles and set by Andreas Mueller.
Aleatricity is 200 years of science, technology and cultural history put into a noisy little piece, with Frankenstein as the glue sticking it all together. Aleatricity uses only samples generated by circuit-bent instrument and homemade oscillators. Thus, these sounds cannot be assigned to a definite pitch or scale, they seem to be aleatoric at first glance. But upon a closer look at the technology of their electronic generation, one quickly realizes that they are not: they are created by unambiguous laws of digital logic, following simple yes/no-decisions. This is reflected in the title: "Aleatricity" is a blend of "aleatoric" (random) and "electricity", two words whose close relation is being illustrated by the visual realization in Second Life: the accidental discovery of the nerve-system by Luigi Galvani and the act of writing against the boredom of a rainy summer by Mary Shelley, which procreated the world's first science-fiction novel "Frankenstein" are brought into a visual and acoustic relation which exemplifies that seemingly unconnected things are often closely related.

Andreas Mueller, member of the media-art group Pomodoro Bolzano, started exploring the sonic universe with a tape recorder during elementary school, when he tried out things from a book on tape-experiments from the school's library. During his teenage years in the eighties, while playing guitar in noisy bands, he started publishing experimental tracks through the international tape-trader scene. Despite detours into other fields of art his focus has stayed on audio-art, performing mainly under the name Transponderfish. He has made computer-aided music for more than 20 years, and his background in both Linguistics and research programming fuel his unique perspective. With his avatar Bingo Onomatopoeia he researches the creative potential of the virtual reality in Second Life: by networking, collaborating with other artists, building instruments for the Avatar Orchestra Metaverse and by performing. Recently he built a large-scale interactive media-installation for the Regensburg high-school Von-Müller-Gymnasium, both as artist with Pomodoro Bolzano, as well as a programmer, custom building the required software in Processing. 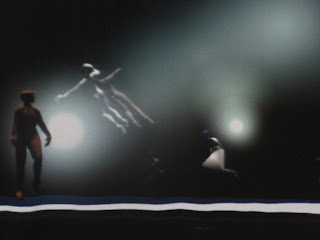 Composition, instrument design and sine tones by Tina Pearson
Instrument design, construction and processed field recordings by Andreas Mueller.
Particle receiver and set for first version by Sachiko Hayashi
Commissioned by the Deep Listening Institute, 2008
PwRHm explores electricity and connectivity through the relationship of two sets sine tones tuned to the harmonic series of the Alternating Currents of the North American (60 Hz) and European/Asian (50 Hz) electric systems; modified field recordings of electric motors and generators from each continent; and the live breath rhythms of the globally dispersed players. Each avatar/player plays one or more instruments according to their present geographic location to create the soundworld of the piece, with breath rhythms determining pacing and intensity. The main group of players sounds two sets of sine tones juxtaposed, offering an intimate exploration of the insides of a just minor third, and the resulting textures of beats and difference tones. Two soloists play a selection of tuned generator and motor sounds. The piece is a question about the possibilities of musical expressiveness with such pared down materials in a context of telematic conducting and improvisation in a visually charged environment, ie) can we meet like this and make a new kind of wired music?

In This Far Now (A Cyber Song of Longing) 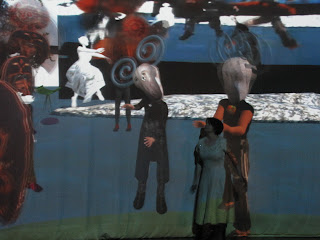 Composition: Liz Solo and Tina Pearson
Virtual Singing Masks and animations: Norman Lowrey
Set design: Frieda Korda and Max D Well
Texts: Liz Solo, Tina Pearson, Frieda Kuterna, Max D Well, Bjorn Eriksson
In This Far Now is an evolving story in mixed form inspired by a collective realization of the depth of our journey in hybrid realities. Having met in the virtual world of Second Life, Liz Solo and Tina Pearson meet here in St John’s to move forward their mutual questions about where the virtual and non-virtual meet, where they differ and if there is a difference. Within the “home” and safety of the Avatar Orchestra Metaverse’s strongly developed telematic improvisation skills, the onsite performers and virtual performers attempt a kind of hybrid communication using gesture, sound, voice, text and memory. While becoming increasingly digitized, hybridized and wired in many aspects of their lives, the artists also draw upon a recognition of pervasive longing, for a real or imagined past, present or future that has had a significant influence on their work.

Norman Lowrey is a mask maker/composer, Chair of the Music Department at Drew University with Ph.D. from the Eastman School of Music. He is the originator of Singing Masks, which incorporate flutes, reeds, ratchets and other sounding devices. He has presented Singing Mask ceremony/performances at such locations as Plan B and SITE Santa Fe in Santa Fe New Mexico, Roulette and Lincoln Center in New York, and at the site of pictograph caves outside Billings, Montana. His most recent work has been making virtual versions of his masks for use by the Avatar Orchestra Metaverse online in Second Life. http://www.users.drew.edu/nlowrey/

Frieda Kuterna (Antwerp, Belguim) and Max D. Well (Regensurg) are media artists who collaborate and perform in multi media platforms as the “Vireal Couple’ ∞Compagnous de Route∞, researching the UniMetaInterTransVerse, the fringes between real and virtual life, vireality and constant neuropuncture. Max D Well is also a member of the Pomodoro Bolzano media art Collective in Regensburg, Germany, investigating Media and Performance Art, Multiple Avatars, Scouting, Manouver and Networking, Expanded media projects and Pataphysics. Frieda Kuterna is an actor and a costume, fabric and photo artist whose work has been seen in gallery spaces and sets in “real” and networked platforms. http://www.pbspace.de/

Liz Solo is a cross-disciplinary, cross-platform interventionist specializing in performance. She is co-founder and director of the Black Bag Media Collective in St. John's, and is the current manager and Curator of the Odyssey Contemporary Art and Performance Simulator in the online world of Second Life. Liz's band, The Black Bags are preparing to release their first full length recording due in the Fall of 2012 and her multi-media video piece “the machine” is also expected this year. Liz is a member of the online artist collectives the Second Front, the Third Faction and the Avatar Orchestra Metaverse, which she and Tina Pearson bring to Sound Symposium XVI. http://www.lizsolo.com

Tina M Pearson is a composer and musician whose practice juxtaposes sonic phenomena, perception and modes of human interaction. She performs with voice, flute, glass and accordion, and telematically with physical, electronic and virtual instruments. She enjoys creating collaborative projects that play with the boundaries between languages, disciplines and cultures, and between creators, performers and audiences. Her music has been commissioned for dance, video, film, radio and spoken word performances and presented throughout Europe and North America. Tina currently performs with LaSaM, the Avatar Orchestra Metaverse and OPEN ACTIONS.  http://tinapearson.wordpress.com/

All photos from onsite screen shots during live performance in St. John's by Lyssa Pearson.