The Stories of Avatar Orchestra Metaverse

A compilation of memories from Avatar Orchestra early members


"AOM began to work and to play in march 2007.
We, at that time the avatars maxxo klaar, paco mariani, miulew takahe, dethomas dibou, bingo onomatopoeia and vit latynina had been teeming up during december and january 2007 to make a live performance at the Pomodoro Bolzanos Art's Birthday celebration on the 17th january. During this time we where discussing alot about future collaborative works combining music.
So we ended up at Dorkbot Second Life first meeting on the 19th february 2007. There we met maximillian nakamura that presented this meeting. We came to discuss about collaborative works and about gathering more avatars to perform pieces in orchestral format like possibilities to make a virtual Vicky's Mosquitos in this new orchestral concept in SL and the Fadheit piece that maximillian introduced.

We started to form the idea of doing a Vickys Mosquitos #13 at the Art.Think.Box / Netherbeck of Pomodoro Bolzano. Harold Schellinx (aka hars hefferman) supported this idea to make a version of Vicky in SL. hars and his Ookoi compagnon Peter Mertens (aka frans peterman) was very involved in the rehearsals to make the premiere of Vicky´s Mosquitos #13 on the 14th march 2007 in a mixed reality context as Ookoi was invited at The Waag festival in Amsterdam on this date and we all thought it an interesting thing to play with this piece together with the green dressed real Ookoi members present in Amsterdam at same time as the green dressed avatars was playing in Second Life. bingo onomatopoeia was programming the aviophone for this piece (the instrument we played: see the glossary). vit latynina made the choreography. hars and frans made the green Ookoi dresses for AOM to wear. miulew takahe wrote the score and created samples and edited the Vicky voices in collaboration with hars. On the 14th of march was the premiere of Avatar Orchestra Metaverse performing Vickys Mosquitos #13 for both inWorld avatar audience at art.think.box and in real at The Waag festival in Amsterdam."


an account of the first performance by AOM, Vicky's Mosquitos from harsmedia, the blog of Harold Schellinx

march 24, 2007.
Killer TV is a series of HD internet broadcasts by De Waag Society in Amsterdam. On wednesday march 14th, 2007, ookoi was on Killer TV, as part of a broadcast featuring interviews and discussions with net researcher and artist John Hopkins and choreographer André Gingras.
The live broadcast took place in the Waag Society lounge, on the fifth floor of pakhuis de Zwijger, where ookoi appeared to be present, and performed.
Something between then and when.
Somewhere between here and there.

The evening started at 19h, with a premiere of ookoi's kibibyte, 1024. Then, shortly after 21h, there was another premiere of sorts, when ookoi joined AOM, the Avatar Orchestra Metaverse, live in Second Life, for a performance - the thirteenth - of Vicky's Mosquitos.
This event was hosted by the Pomodoro Bolzano group, at theArt.Think.Box Netherbeck.
Doing a Vicky's Mosquitos in SecondLife was an initiative of Miulew Takahe, aka Björn Eriksson, who - as you may recall - in september of last year organized another great Vicky event, in real life, in an old oil cistern on Svanö, an island in the swedish river of Ångermanälven.

One of the challenges in doing Vicky's Mosquitos in SecondLife, was (except for Vicky's voice) to use sounds found in and taken from the virtual world, and for the avatar orchestra to play the sounds inside the SecondLife space. For this to be possible, Miulew compiled a collection of sounds, and Bingo Onomatopeia of the Pomodoro Bolzano group created an instrument to play them: the aviophone (see the picture). By clicking on the pointed end one selects one in a list of 18 sounds, that than can be played by hitting the other end.

Miulew came up with a score for the performance. The orchestra players were divided into three groups: there were A-, B, and C-players, each having their own order of the aviophone-sounds to be played and to be changed every minute. Apart from playing, Miulew also directed the orchestra, indicating time and dynamics, and streamed parts of Vicky's reading from his home in Sweden; one at the beginning, one in the middle, and one at the end.
Vit Latynina, also of Pomodoro Bolzano, proposed a sketch for a choreography for the performance (see picture). Moreover all orchestra players came in uni-form ... in ookoi tails ...

Between then and when ...
Between here and there ...
Arguably, VM13 has been the most thoroughly rehearsed Vicky performance to date, with the Avatar Orchestra Metaverse meeting several evenings in the weeks before the performance, to do run-through's and discuss the event. Through its having been part of the Killer TV broadcast, it certainly is the best documented one to date... Also because of the series of podcasts that Miulew devoted to VM13, and which enable you to listen - in full - to three of the rehearsals [ 27.02.2007 - 12.03.2007 -13.03.2007 ] as well as to the actual performance on the 14th of March.


From the blog post
Wirxli joins the Avatar Orchestra!
Hey performance art and performing art fans,
I have decided to go back to my roots and experiment with being a "performing artist" like the good ol' days of RL. I think this will be my only exception to my usual rule of being a puritan "performance artist" and not dabbling too much into that taboo realm known as the "performing arts".
Maximillian Namakura started this group called the "Avatar Orchestra Metaverse" and asked me to join. So, about 30 minutes after accepting his offer, I performed at my first rehearsal at the Odyssey Island Ampitheatre about 20 minutes ago. We will be playing next tuesday at 2 PM PST/SL time. We will not be playing for long - just one of Nakamura's own original compositions ... (to continue reading, click here)

From the blog post
My First gig with the Avatar Orchestra Metaverse, March 27, 2007 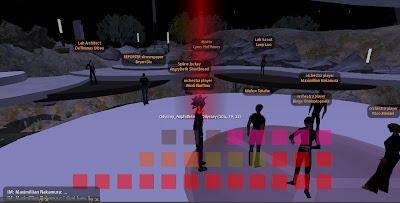 Here I am about to officially perform with the Avatar Orchestra Metaverse for the 1st time.You can see from my point of view that is was midnight and you can also see what the performance interface looked like from my perspective. The nametags above the avatars give you their names. DeThomas Dibou will be joining our group for the next performance.

I have just literally finished performing my first concert with the Avatar Orchestra Metaverse at the Odyssey Ampitheater (Odyssey 104, 80, 22 are the stage coordinates)!
We performed a piece called "FADHEIT" which was composed by the group's founder  Maximillian Nakamura.
In addition to Max and myself, the performers consisted of Bingo Onomatopoeia, Paco Mariani andMiulew Takahe. DeThomas Dibou will be officially joining us as an orchestra player for our next performance but for now, he had to resort to listening to us from the sidelines.
There was great photo-documentation by Loop Luo!
She took a portrait of me, plus a group photo and more photos on Flickr. Bryan Dix from the SL-Newspaper was also there so I expect to see a news report from him very soon.
Stay tuned for some more embedded Youtube video-documents of upcoming performances courtesy of AngryBeth Shortbread :-)
In the meantime, check out Miulew Takehe's audio podcast recordings of takes 2 & 3.

My rehearsal as an orchestra player for the Avatar Orchestra Metaverse was just about to begin when I took this quick snapshot. This composition is Rue Blanche (2007) by Miulew Takahe. The innovativeHUD interface you are seeing is by Bingo Onomatopoeia

Hey performance art and new-muzak fans! I literally just finished rehearsing once again for the Avatar Orchestra Metaverse! Wow, Miulew did a brilliant job of composing for Bingo's triple-HUD performance interface system :-) I hope Miulew andBingo write more compositions together! The piece reminds me of Alvin Lucier or some classic sine tone composition by a member of the Cologne school although I guess this composition really belongs more to the Regensburg school...heheheheh!