The Avatar Orchestra Metaverse performed in a networked composition by Pauline Oliveros during her presentation, via Skype, at the Canadian New Music Network Forum 2012 in Vancouver, January 22.


The composition was performed after Pauline's presentation of the Deep Listening Institute's Adaptive Use Musical Instruments (AUMI) program, demonstrated by Jackie Heyen, also via Skype. 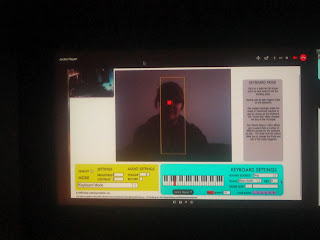 After the demonstration, musicians attending the Forum were invited to participate in the piece. Some were instructed how to play with the three AUMI programs installed on iMac computers in front of the stage.

Others were provided monitors that gave a view of two groups of AOM performers in Second Life and given information about the virtual instruments and visual representations of sound. 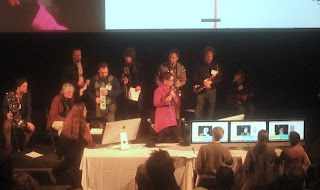 Pauline gave the performance instructions for Vancouver Calling to all the live players - musicians in Vancouver on acoustic instruments, AUMI players in Vancouver, Jackie playing AUMI via Skype in New York, and the Avatar Orchestra in Second Life. See the score here. 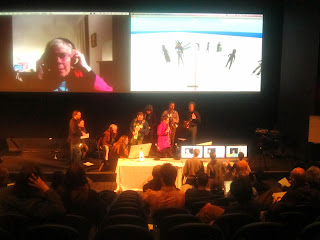 And then the global multi-platform telematic performance. 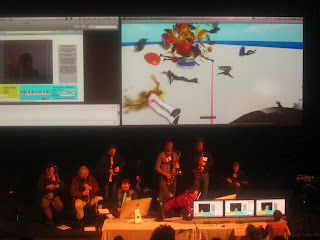