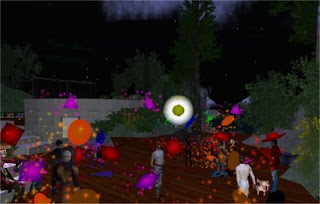 Here below is a review of the Avatar Orchestra Metaverse performance March 27, 2010 at Sea Turtle Island in Second Life. It was written by Michael Peters on his Time Stands Still blog
(Photos by Jeff Duke)

Time Stands Still: My Avatar is Not Blue
by Michael Peters

"I went to an amazing concert yesterday - while sitting at home. Or shall we say, as my 'real' body was sitting at home? I was watching the performance while sitting in some kind of amphitheatre, surrounded by two or three dozen of very strange other people. Maybe I was the strangest of all because I didn't even look like a human - for some reason, the avatar that I had chosen looks like a fox.

Since my first login to Second Life a couple of years ago, I had not spent much time there - I always thought it was a nice thing in theory, but disappointingly clunky in reality. I had originally come here with ideas of cyberspace (as William Gibson coined it) or the metaverse (as Neal Stephenson called his version), some other kind of immersive reality full of wonder (as if our regular reality wasn't full of wonder).

Second Life was obviously inspired by these ideas, and even though we still can't directly plug in using some kind of firewire plug in our heads, and instead have to type on keyboards and look on screens, and even though the graphics are far less perfect than I had expected, it has evolved (since its launch in 2003) into an amazing huge parallel universe full of people that interact in many ways (I read that about 60,000 people are logged in at any given moment) , and more places than one can ever visit.

Usually while my fox avatar had explored SL, he was more or less alone - I seem to be drawn more towards the lonely island than towards a busy bar full of strangers. It was nice yesterday though to be in the audience with at least one person that I knew (Jeff Duke, a fellow loop musician from Florida, who also took two photos during the performance - see below).

The Avatar Orchestra Metaverse is a collective of musicians from all over the world, one of them being Pauline Oliveros, to my surprise, a key figure of avantgarde music, livelooping, and deep listening. The orchestra has weekly rehearsals and performs in Second Life, but sometimes also in "First Life". For their Second Life performances, special technology has been developed such as virtual instruments and interactive animations.

The concert yesterday lasted for about one hour. The orchestra consisted of about a dozen musicians this time (with funny Second Life names such as Flivelwitz Alsop, Bingo Onomatopoeia, Humming Pera, Gumnosophistai Nurmi, BlaiseDeLaFrance Voom), playing four compositions by four composers who also did the conducting. The performances were a mixture of very different kinds of electronic sounds, movements, and animations, and I found that I was quickly drawn into their special virtual reality kind of magic and the astonishing dynamics of the pieces.

Something interesting, but hard to describe, happens when one suddenly forgets about the virtuality of this, and gets drawn into this world, which is, after all, populated by avatars of real people. Amazing how quickly the brain gets adjusted to something that is so different to our usual reality. It felt similar to sitting in a really fascinating movie and forgetting about sitting in a movie theatre.

Getting out of this, and back into ordinary reality: the brain switches back, but it takes some minutes. Until then, I wonder about the amazingly high resolution of the trees on the hill and how smoothly I can move across the terrace."