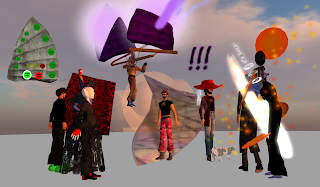 The Orchestra will create a musical accompaniment, using its inworld instruments, to "Give Peace a Chance" by Yoko Ono and John Lennon, and invites the audience to sing along with virtual sound. Following the singalong, the Orchestra will dedicate to Ghandi and Peace a meditative improvisation using virtual instruments from its compositions Fadheit, Fragula, Birth, PwRHm, In Whirled(Trance)Formations, Ritual, Rue Blanche and Aleatricity.