The Long Nights of Avatar Orchestra Metaverse - performances during august -07. 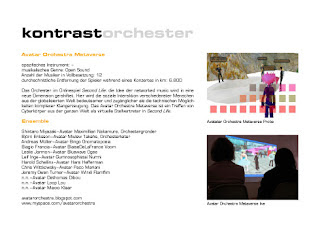 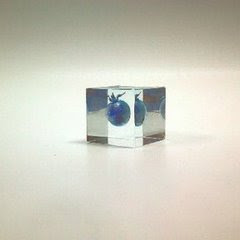 Long time no bloggings . . . . well it is lot's of things to catch up now which just makes me exhausted to "post-blog" about so I will here only mention those gigs and performances we did the latest weeks and also I warmly recommend Wirxli Flimflams great bloggings on AOM whereabouts in Chicago, Regensburg and Berlin.
So briefly here what we did on these long nights in late august. On friday the 24th of august we did the SLCC conference preformance. Here we ran the AOM classics.
Then day after we played forst at art.xxXtenxion happenings in Regensburg, Bavaria, Germany. Here we first played in the virtual Leerer Beutel for later transporting us and audiences to virtual Haidplatz where we once again did the master piece by Wirxli Flimflam, the Slippery Slope, now with even more slippery slopes by one of AOM's main architects Dethomas Dibou. Later same evening we did play twice at the kontrastorchester happenings at Kulturforum in Berlin, Germany. In
All of these three performance was mixed reality performance in the sense that AOM was presented to a RL audience with video projectors on the wall in parallell with us also having a virtual audience listening to us at the different SL rooms. . The Regensburg and Berlin sets also included real life navigators steering their avatars visible for real life audience coming to both Leerer Beutel in Regensburg and at Kulturforum in Berlin. At the Regensburger sets there were 4 navigators steering their avatars. The avatars steered was Paco Mariani, Maxxo Klaar, Jori Tokyo and Miulew Takahe. At the Berlin sets there where Bingo Onomatopoeia, Gumnosophistai Nurmi and AOMs founder Maximillian Makamura being navigated by their supreme beings. Here will soon be posted some photos from these events. 1.2.3.4.