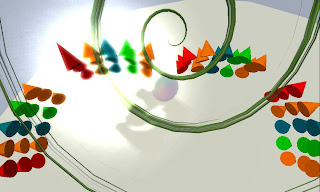 Pataphone Aomprovisation
In memory of Michel Waisvisz
Members of AOM perform on Michel Waisvisz' instrument, the Pataphone, designed and build by Michel and his avatar Pata Mayo at Steim. The audience will also have a chance to try this instrument.

Aleacitry
by Bingo Onomatopoeia (Andreas Mueller)
"This piece attempts to leave the known harmonic scheme completely, trying to use mostly sounds that have no real pitch. As sources, there are my circuit-bent instruments and my archive of field-recordings. My intention is to have the orchestra perform an expressionist soundpainting - the first idea was to do "The four seasons", with the name of the seasons as the only conductor's advices (plus maybe some more references to settings/weather, like "Play a little pond in the woods, early & misty morning in spring".) Aleatoric/citric/electric are blended to form the title ... it fits into Second Life, also into the idea that random sounds are used to describe a certain mood."

Waste From Real Life
by BlaiseDeLaFrance Voom (Biagio Francia)
The instruments built for this composition use a blend of sounds including synthesizer patches, drum and piano samples. The piece can be performed with live percussion and other instruments, and includes samples of sounds gathered by the performers from their 'real' lives. The October 3rd version features a virtual cello.

In Whirled (Trance) Formations
by North Zipper (Norman Lowrey)
featuring Singing Masks live at Drew University and virtually in Second Life at a campfire on the campus at U21 Global. "In Whirled Trance(Formations) is an improvisatory piece created for the Avatar Orchestra Metatverse by North Zipper. It invites participants to transform themselves through sounding and moving, with members of AOM primarily employing North's virtual versions of his Singing Masks as "vehicles of transformation." The result is intended to be a spontaneously playful shaping of sound, light, and motion." Avatar Orchestra Metaverse performance June 20, 2008 at U21 Global in Second Life
Filmed by Liz Solo while she was performing.